Ameren in a report to the Federal Energy Regulatory Commission says it does not believe a 1.9 earthquake 100 miles to the southeast on the New Madrid fault played any role six hours later in the December 14, 2005, Taum Sauk Reservoir collapse.

Amerren does not beliee the earthquake contributed in way to the failure of the upper Taum Sauk reservoir rock fill dike or to the parapet wall. Further, as descibed blow, Ameren does not believe that this earthquake was “unusual.” However, in order to ensure full disclcousre, Ameren wanted to make Ferc aware of this event.

The quake in question might be dubbed the “Matthews Quake” because of its proximity to Matthews Missouri.

The New Madrid Fault — site of the most powerful earthquake reported in “the Lower 48” — has quakes almost everyday and the report noted that in the six months preceding January 10 there had been 100 quakes on the fault in the range of 1.4 to 2.8.

Authorities note that if another quake on the size of the 1812 8.8 quake hits, it will destroy the entire Midwest from Memphis through St. Louis and on to Cincinnati because the porous soil is more conducive to transmitting waves than the rock based West Coast (and also because the Midwest seems to have virtually no quake preparations).

This of course gives rise to questions about the Taum Sauk Reservoir. Why would they build a reservoir on top of a mountain with only a rock filled dike — particularly in area where there’s a lot of shaking involving those rocks? 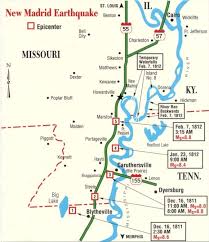 Coincidentally, news reports indicate considerable difference of opinion over whether a massive quake is imminent.