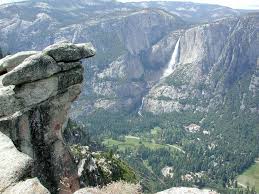 A judge has thrown out the lawsuit that Yosemite was responsible for a fatal rock slide.

Below is the original September 14, 2005, post:
Superclimb reports climbers fear a $20 million wrongful death suit against Yosemite will end the sport there.

A rockslide six years ago in Yosemite, the US climbing haven, killed climber Peter Terbush. Now TerbushÃ¢â‚¬â„¢s parents have filed a lawsuit against the National Parks Service for wrongful death, accusing the park of causing the rock slide by having an overflowing water tank in the area. Geologists argue whether this would indeed cause a rockslide.

According to the Los Angeles Times his parents suspect that mankind’s handprint atop Glacier Point Ã¢â‚¬â€ most notably a bathroom water system prone to overflow Ã¢â‚¬â€ lubricated the cliff face, provoking a flurry of rock falls, including the June 1999 tragedy that claimed Terbush.