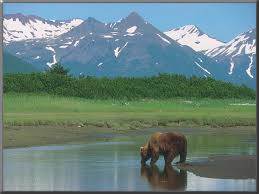 Helenair reports a female grizzly that attacked and injured two California hikers in August in Glacier National Park will be spared because authorities believe she reacted to a perceived threat to her two cubs.

Johan Otter, 43, director of physical, speech and occupational therapy at Scripps Memorial Hospital in San Diego, and his 18-year-old daughter, Jenna, were mauled by the female bear and suffered additional injuries when they tumbled over steep cliffs below the trail. Both had to be airlifted from the park and were hospitalized.

In a written statement, the park said that while the Otters were talking while hiking up the trail, they acknowledged they were not making a lot of noise Ã¢â‚¬â€ as experts advise while traveling in bear country Ã¢â‚¬â€ and encountered the bears on a blind corner.

The bears left immediately after the attack and have not been seen since, park officials said.