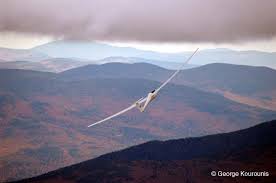 The Caledonian Record reports National Landmark of Soaring has been dedicated at the Mount Washington Resort at Bretton Woods.

“All this stuff about Mount Washington having the worst weather in the world, that’s candy for glider pilots.”

A mountain wave is where stable and unstable air meet directly over a mountain, forcing the air upward. The gliders ride this upward-moving air, just as birds do. The rule of thumb is that a glider can travel to an altitude six or seven times the elevation of the mountain.

The unofficial record for a glider using the Mount Washington wave is around 33,000 feet, he said. The record altitude for a glider anywhere is 49,000 feet – that was done out West.

The longer flights are usually done mostly at a lower altitude, doing what is called ridge running, flying just above the treetops for long distances, Brooker said. The high-altitude flights are usually short because oxygen is needed (for any flight higher than 14,000 feet, one is required by law to have oxygen) and because it gets quite cold at the higher altitudes, often around 40 below zero no matter what time of year it is. On a flight like that, Brooker said, he is always wearing down-filled apparel.

The National Soaring Museum chose the Mount Washington hotel for this year’s event because of its historic importance in gliding; in 1938 it was the site of a famous flight. It is also used often as a landmark for soaring. A flight under 18,000 feet can be made at any time, Brooker said, but when someone wants to fly over that altitude, he or she must get written, advanced permission from the FAA because that is where airliners fly. When permission is received, certain ground landmarks are given to the pilots as the outer limits for a flight and the hotel is often one of them, as it is for this year’s event, he said.

Early fall is one of the best times for the mountain waves, as is late winter and early spring, Brooker said, though some pilots present at the event said they preferred to fly in winter.

There has been only one fatality out of the thousands of mountain wave flights made in the Mount Washington area since the 1960s, Brooker said. There are dangers to the sport, but if one is aware of the dangers, they can be minimized.