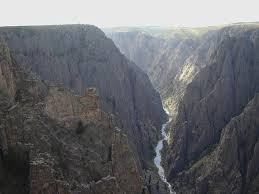 The Montrose Press reports a climber fell nearly 60 feet into Black Canyon of the Gunnison National Park as he was ascending the Escape Artist route on the North Rim wall when he fell and was left suspended in his climbing gear.

A rescue crew of park rangers and other unidentified rescue workers then lowered the man down from his perch past 600 feet of scree material to the canyon floor.

The victim was flown out of the canyon Sunday morning by private helicopter to the U.S. Bureau of Land Management’s landing pad in Montrose, where he was then taken by ambulance to Montrose Memorial Hospital.