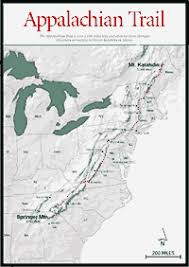 Thompson reversed the usual route starting on Katahdin and ending on Springer Mountain.

Thompson, of Hampton Falls, NH, said he lost 30 pounds on the hike.

“You have constant first-stage hallucinations called character recognition (hallucinations),” Thompson said. “You’re having trouble with character recognition where you see a stick on the ground and it looks like a dollar bill. You look at a physical object, but your mind turns that object into something else. It just comes with sleepiness and absolute physical exertion.”