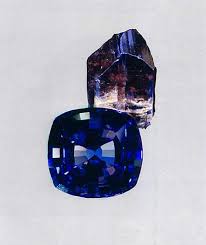 The stone weighs a record 16,839 carats and is the size of a brick. Market value of polished tanzanite varies between $200 and $2,000 per carat Tanzanite was discovered by a Masai tribesman near Kilimanjaro, Africa’s highest mountain, in 1967. The rock was named and first sold by New York jeweler Tiffany & Co. the following year. It’s only found in the Merelani hills, in a 5 kilometer (3 mile) strip of land in the north of Tanzania.

“This really is a sizeable stone, comparable to what the Cullinan Diamond is to the diamond industry,” TanzaniteOne Deputy Chairman Ami Mpungwe said in a Regulatory News Service statement today. The 3,106-carat Cullinan Diamond was found in South Africa in 1905 and parts of it are now incorporated into Britain’s royal crown and scepter.

The 3 kilogram (6.6 pound) tanzanite stone was found 270 meters underground in the Bravo shaft, the southernmost shaft of TanzaniteOne’s license area, the company said. Before today’s announcement, the largest stone found weighed 3.2 kilograms, but it broke up as it was being removed from the ground.

The latest find, named “The Mawenzi,” after the second highest of Kilimanjaro’s three peaks, will be put on display before being cut up, the company said.

“We were reluctant to name it Uhuru, after Kilimanjaro’s highest peak, on the off-chance that a larger piece is ever found,” TanzaniteOne’s President Ian Harebottle said in a statement.