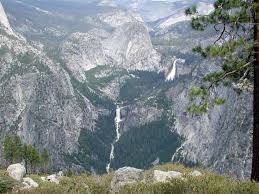 Chintan Chokshi, 24, was swept 300 feet over Yosemite’s Vernal Fall after jumping a fence.

High water levels from melting snowpack have created dangerously strong currents in the river. Park officials noted that swimming is not allowed in the area where the man disappeared.

In the last 30 years, about 10 people have died after falling over the waterfalls.

The barrier that Chokshi crossed has multiple signs warning hikers not to do so. One such sign shows a stick figure person going over a waterfall.

The last time a hiker was swept over a Yosemite waterfall was in July 1999, when a Diamond Bar resident plunged 594 feet down the Nevada Falls, according to The Union Democrat’s records.

Prior to that, a Mountain View man was swept over Nevada Falls in July 1997.