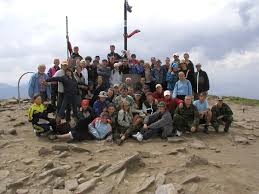 Two of the climbers died from health problems, and a third was killed when the weather turned bad and lightening struck near the peak,.
Yushchenko has climbed the mountain about 30 times since 1971. In 2001, he announced the formation of his party, Our Ukraine, from atop the mountain. This time, the president was accompanied by two of his daughters, and was stopped almost every 10 meters (33 feet) to sign autographs and pose for photographs with other climbers, news reports said.