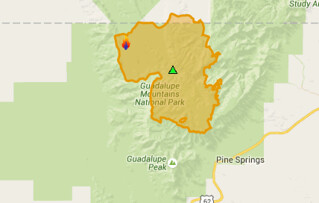 Acres: 14,442 Start Date: May 7, 2016
Cause: Lightning Location: 46 miles SW of Carlsbad, NM
Containment: 50% Fuels/Topography: Timber/grass/chaparral, rugged terrain
Total personnel: 30
Fire crews continue to monitor fire activity and are working to reopen areas of Guadalupe Mountains National Park. A Burned Area Emergency Response (BAER) team is currently engaged in evaluating and mitigating hazardous trees, vegetation, and rockfalls in campsites and along trail areas in preparation for reopening trails, campgrounds, and areas of the backcountry impacted by the Coyote Fire. Mitigation efforts will begin in the Dog Canyon area, where fire activity has ceased. Tejas, Marcus, and Bush Mountain trails, as well as slopes along Blue Ridge received low intensity fire activity which will aid long term ecological benefits to the landscape. The remnants of an old hunting cabin known as the Cox Cabin were the only values lost in this area of the park.
Although the potential for fire spread remains minimal, small pockets of fuels and green islands in the fire interior are expected to continue to burn and occasional smoke may to be visible. Precipitation is projected in the 72 hour weather outlook. Significant rainfall will likely further diminish fire activity.
Crews remain vigilant in their duties both on the fire and off. The public is reminded that there are still inherent dangers regarding the Coyote Fire, and to be alert to changing area restrictions. It is also important to watch for fire vehicles and practice caution while passing.