Model Explains Why McKinley is Where It Is 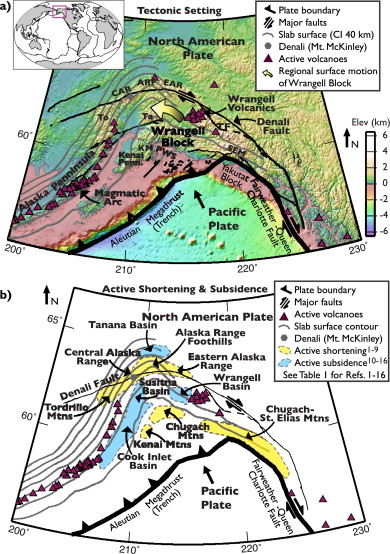 After 17,000 hours of Super Computer modeling scientist say they can explain why McKinley is where it is.

Geologists have always said the mountain was created by the Pacific Plate sinking beneath the North American Plate. However they did not know precisely why the mountain formed where it did and the mountain is farther inland than what could be explained in the previous models.

Scientists from Brown University and University of California Davis say it was formed:

remarkably low angle at which the Pacific Plate sinks under the North American Plate — called flat slab subduction — in addition to an unrelated bend in a geologic fault farther inland, together force land upward into the Central Alaska Range

The paper is the August 2013 issue of Earth and Planetary Science Letters entitled “Three-dimensional numerical models of flat slab subduction and the Denali fault driving deformation in south-central Alaska” by Margarete A. Jadamec, Magali I. Billen, Sarah M. Roesk (pdf)

Early theories of plate tectonics assumed plates were rigid with deformation limited to within a few tens of kilometers of the plate boundary. However, observations indicate most continental plates defy such rigid behavior with deformation extending over 1000 kilometers inboard. We construct three-dimensional (3D) numerical models of the boundary between the Pacific and North American plates in Alaska to investigate the relative controls of flat slab subduction, continental scale faulting, and a non-linear rheology on deformation in the overriding plate. The models incorporate a realistic slab shape based on seismicity and seismic tomography and a variable thermal structure for both the subducting and overriding plates based on geologic and geophysical observables. The inclusion of the Denali fault in the models allows for the portion of south-central Alaska between the Denali fault and the trench to partially decouple from the rest of North America, forming an independently moving region that correlates to what has been described from geologic and geodetic studies as the Wrangell block. The motion of the Wrangell block tracks the motion of the flat slab in the subsurface indicating the subducting plate is driving the motion of the Wrangell block. Models using a composite (Newtonian and non-Newtonian) viscosity predict compressional motion along the northern bend in the Denali fault, consistent with thermochronologic data that show significant late Neogene exhumation in the central Alaska Range, including at Mt. McKinley, the tallest mountain in North America. These 3D numerical models of the Pacific–North American margin in Alaska show the subducting slab is the main driver of overriding plate deformation in south-central Alaska and combined with the Denali fault can reproduce several first order tectonic features of the region including the motion of the Wrangell block, uplift in the central Alaska Range, subsidence in the Cook Inlet-Susitna Basins, and upwelling at the slab edge beneath the Wrangell volcanics.